Come for the chocolate, stay for the xenophobia

Every time the Rovian Swiss People’s Party (often described as “extreme right” in the English-speaking press, though they’re really more nativist than explicitly fascist) manages to ram one of its populist cries for attention through the initiative process, I wonder why I, as a foreigner, insist on staying in a country so intent on doing silly and dangerous things to its constitution in service of its hate of us. Over time, Switzerland feels less and less welcoming. But self-deportation is exactly what they want me to do, a fact that strengthens my resolve to stay here long enough to become the aged burden to the social-insurance scheme the political discussion here assumes that I am.

Today’s acceptance of the _Masseneinwanderungsinitiative _(“Initiative on mass immigration”) does not change the score for the dumbest sentence in the Swiss constitution, a contest still handily won by Article 72 clause 3 ("The construction of minarets is forbidden"). But what Article 121(a) lacks in stupidity it makes up for in dangerousness. The article anchors a requirement for numerical limits on immigration in the Constitution, and further forbids the implementation of any treaty incompatible with those limits, and requires renegotiation of such treaties already signed.

The issue here is that, while Switzerland is not a member of the European Union, it has signed a set of bilateral agreements therewith which essentially integrate its economy with Europe. This has, for the most part, worked. A cornerstone of this arrangement is the free movement of people, both temporarily (via the Schengen treaty) and permanently: Europeans have, or rather, had, the right to come to Switzerland to work, and Swiss the same in Europe. These bilateral treaties will need to be renegotiated (per Article 121(a) clause 4 and Article 197.9 clause 1).

The problem with this is that the European Union has made it very clear to anyone who cares to know that it has no interest whatsoever in renegotiating just the clauses related to immigration, that any renegotiation will essentially involve starting from the beginning, and that it has come to regret special treatment for Switzerland in the first place. So, most probably, what this means is the collapse of the entire framework of Swiss-EU relations, followed by their replacement by… something else, and what that something else is is at the moment completely uncertain. This uncertainty touches everything, from customs to research agreements to the openness of the borders, and will most probably take a very long time to resolve.

One thing which is certain from simple geography is that Switzerland’s future lies with the EU (at least exactly as much as the future of the rest of the EU member states lies with the EU): 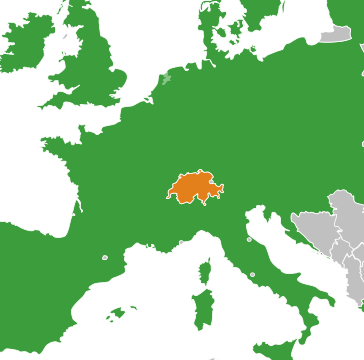 At least, I’m pretty sure there’s not enough geothermal and/or gravitational potential energy in Switzerland’s mountains and glaciers and/or enough gold of uncertain provenance in its banks to afford to be able to dig a giant ditch at the border, stick rocket engines under the country, and launch it into an ocean in which it could be the literal island its nativist right wing wishes it were.

There are also not enough Swiss doctors1 and nurses to keep us all healthy, Swiss engineers to build and maintain infrastructure and exports of technical goods and services, Swiss researchers and educators to keep the country academically competitive, or even native Swiss skiers to defend the country’s Olympic honor2. This doesn’t even account all the other jobs done by immigrants everywhere like gardening, fruit picking, hoteliery, food service, and so on. If you thought Los Angeles seemed empty without immigrants, try Zürich.

Over the past five and a half years, Zürich has become my home. Some days I feel more welcome, and some days less. And Switzerland’s got its problems, sure. Many of these can be explained by the inappropriateness of policies and cultural norms applicable to pre-industrial village life in a post-industrial country, but this will be the subject of a future rant. The loudness and backwardness of the right-wing politics here is nothing especially loud or backward in global terms, and is a far cry from the full rejection of the ideals of the Enlightenment that has marked America’s Republicans of late. But it’s hard to ignore the reflexive xenophobia as a good foreigner to whom it does not apply when, as today, the noise machine manages to do real and perhaps lasting damage to Switzerland’s economy, society, and foreign policy.

3: Swiss citizenship, unlike American citiztenship, is jus sanguinus, a situation which leads to about five percent of the population, a little under half a million people, being culturally Swiss, born and raised in the country, but without citizenship.