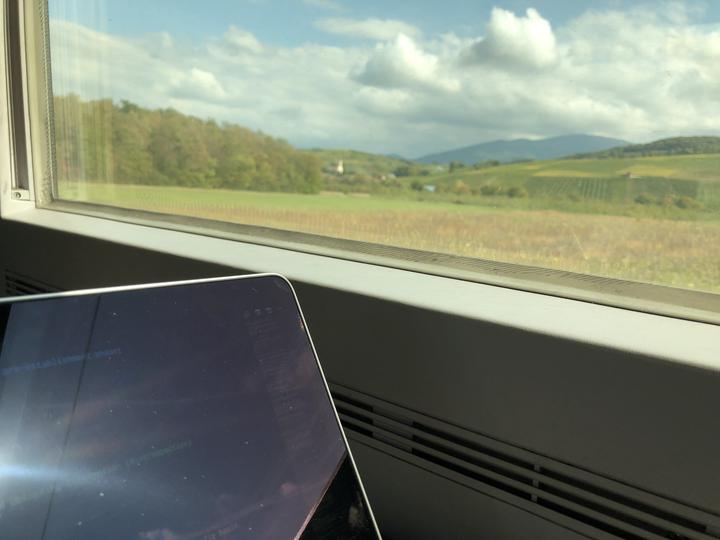 I always love going to Schloss Dagstuhl, a retreat for computer scientists in the middle of nowhere in Saarland, Germany. It’s a little difficult to get to, but the train ride (Wallisellen to Saarbrücken via Zürich and Mannheim) is a nice, slow way to step back from whatever context-switching overhead is dominating my days at the moment and start thinking about the theme of the workshop.

Last October, I went to what’s probably my last Dagstuhl seminar for a while, spending three days around the billiard table and in the wine cellar figuring out whether there’s anything to be done about Encouraging Reproducibility in Scientific Research of the Internet. The seminar ended up focusing of a few themes of deep interest to me, one of which being how to fix academic publishing (at least with respect to computer networking research) so that it works better for researchers, science, and society as a whole, a theme which I’ve written about before. tl;dr I’m hopeful: for more on our vision for this which came out of the workshop, see our upcoming editorial note in ACM CCR.

This was my last Dagstuhl seminar for a while because I’m leaving academia. There are a few reasons for this, all of which are more or less personal, all of which boil down to “there is no future for me here.”

I’m not writing to complain about this. I’ve read a few such farewell letters to the academy tell stories of dreams and hopes dashed against a fundamentally broken system filled with broken people, of abuse and worse. That’s not my story. I’ve been incredibly fortunate in my career as a pseudoacademic, backing into a research-engineering job from a post-dotcom-bust software engineering consulting contract, swinging from there to an industrial research position hosted at a university, having a chance to publish enough to essentially become a postdoc with a BSc. All of these steps were essentially a matter of being in the right place at the right time, and I’m incredibly grateful for everyone who’s helped me get here. I’ve had a chance to think deep thoughts about the Internet and its future, to measure aspects of its evolution in a way that I hope will have some lasting impact, to travel the world and to build interesting collaborations and make great friends. The (pseudo-)academic life I’ve had has a lot to recommend it.

It also has zero job security. I haven’t had a permanent job since 2008, which due to the vagaries of Swiss immigration law would cause me some trouble had I not already become a citizen. I’m a bit of an anomaly in that not having a degree (“postdoc with a BSc”) means I can’t really easily be hired anywhere else for the position I already have. I wasn’t even expecting to make it this far; the project that funded me through the end of last year was basically the result of Mirja and I writing down an idea we had for a thing we wanted to do, pulling together a small consortium of people we wanted to work with, sending it in to the European Commission, then going and looking for real jobs because there was no chance at all of our proposal being accepted — the chances, of course, that a pseudoacademic would get a contract without paying their own way (and then some) being nil. It turns out we’re apparently better at writing proposals than we are at guessing the ratings of same, which was a happy surprise.

I could have gone back for the degree and become a proper academic, which might even lead to a funded position someday. I seriously considered this. ETH even graciously (if provisionally) accepted me to start a PhD after a ten-year career in research, and it might have been fun. But maybe it’s one of those midlife crisis things to consider what happens next, and the prospect of becoming an itinerant postdoc in three years at best, at the age of 44 with two kids and roots in Zürich, appealed less and less the more I thought about it. In the immortal words of Roger Murtaugh, I’m getting too old for this shit.

So I’m starting 2019 with one last month here at ETH to wind down various projects, then I’ll take a month off and it’s on to the next thing. Watch this space.